Attending the Memorial Symposium and Reception for the Anniversary of Japan‐China Treaty of Peace and Friendship in Beijing, China

On October 22, 2013, the symposium and reception were held at Diaoyutai Guesthouse in Beijing, China, marking the 35th anniversary of Japan-China Treaty of Peace and Friendship, and 50th anniversary of the establishment of China-Japan Friendship Association. JICE was invited to the gathering as an organization generating opportunities for cultural exchanges on a grassroots level. On behalf of JICE Ms. Sachiko Yamano, President, Mr. Takashi Akao, Deputy Director of Regional Division 2 of Overseas Business Department, and Ms. Yukari Iizuka, Director of Hokkaido Branch, have attended the event.
At the event, those concerned from the Embassy of Japan in China, Japan-China Friendship Association, municipal governments, Japanese enterprises and the press attended the symposium. Respected figures from both China and Japan, such as Mr. Liu Deyou, the former Deputy Minister of Cultural Affairs Department, and Mr. Uichiro Niwa, the former Japan’s Ambassador to China, have expressed their own opinions candidly. Moreover, at the free discussion session, Ms. Yamano, President of JICE, introduced the projects JICE was implementing on a grassroots level such as the Inter- national Exchange Program and the International Training Program.
Ms.Xui-yun Wang, Vice-President of the China-Japan Friendship Association, who hosted this event, has mentioned that spreading the opportunities for private sector exchange on a grassroots level would lead to the mutual understanding between both nations and that she was looking forward to the achievement of this symposium. 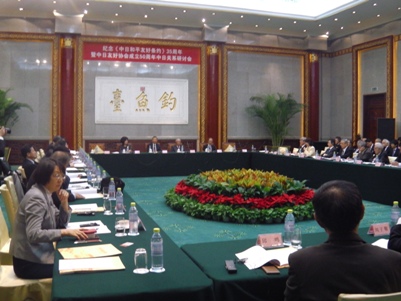 【Venue where the symposium took place.】

【Ms. Yamano (2nd from the left) making a statement in the free-discussion session】
Back to List
Back to Top