Entrusted by the Ministry of Higher Education, the Kingdom of Saudi Arabia, JICE arranged and implemented three study tours in April, June and September, 2014, for the university students (and graduated students) who won awards of “Science Competition” conducted by the said ministry. JICE could provide programmes which were highly evaluated by the delegation; we deeply appreciate the Cultural Office of the Royal Embassy of Saudi Arabia Tokyo for their kind guidance and supports.

For the keynote lecture and workshop conducted on the first day, and programme review on the last day, we invited Dr. Eng. KODATE, Kashiko; who is the executive board member of JICE, as well as the professor emeritus at Japan Women’s University, specially appointed professor at the University of Electro-Communication, a fellow member of the Japan Society of Applied Physics and other notable scientific and educational organisations.

Dr. Kodate worked as teaching staff after her graduation from Japan Women’s University, and then she moved to the University of Tokyo as a researcher of the Info-photonics study. She actively worked for her study so one of her researches was reported by the world famous science magazine, “Nature”. Also she got patents for her researches, such as the Fast Face Recognition Correlator System, the pattern matching system and others. She was awarded by the Ministry of Education, Culture, Sports, Science and Technology, as the notable scientist in 2010. At the same time, Dr. Kodate works hard to cultivate young scientist as an ideal role model or mentor.

When Dr. Kodate mentioned about “seeing is believing” she explained it using scientific terms saying; “information obtained by a ear is 104 bits, but when by eye, it would be 107bits, you may understand how big eyes could get information.” Her words stimulate and inspire the students and motivate them to learn more and more. The delegation of each batch mentioned in the reviewing session or their questionnaires that the keynote lecture made their stay much more useful and valuable. Dr. Kodate’s keynote lecture and interactions are essential elements for the programmes for Saudi female students. 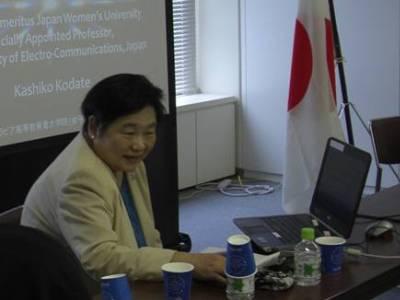 Dr. Kodate, delivering the keynote lecture for the delegation of Batch II

Giving advice to the delegation of Batch III at the reviewing session
Centre: Dr. Kodate /left: Ms. YAMANO, Sachiko, the President of JICE 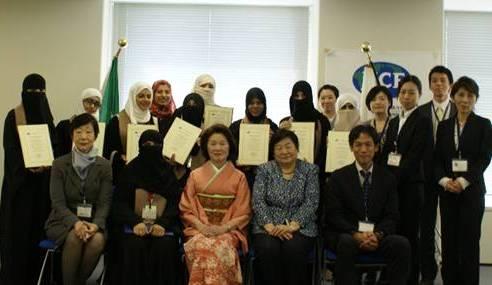