ABE initiative office was established and is located in the central area of capital Dar es Salaam. This office is coordinating with JICA Tanzania office and related Tanzanian governmental organizations to carry out ABE initiative program.
The next visit was PO-PSM which is a window organization of Tanzanian government side for ABE initiative. It plays an important role as a vice-chairperson in the Operating Committee that approves implementing policies and dispatch of successful candidates. Mr. Elisante M.Mbiwolo, Assistant Director and other senior members of PO-PSN welcomed JICE delegation and had opinion exchanges on ABE initiative. 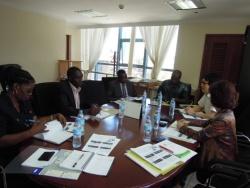 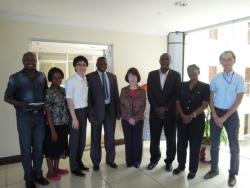 With PO-PSM & JICA officers
IMED is an organization which conducts training and research for the promotion of employment and entrepreneurship targeting young generation in Tanzania. JICE delegation met with Dr. Donath Olomi, Chief Executive Officer and other members of his staff who provided information on situation of entrepreneurship development in Tanzania. Discussion on a possibility of cooperation between ABE initiative and IMED’s activities was carried out. 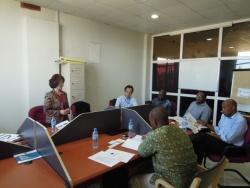 Greeting from Ms.Yamano (left) at IMED 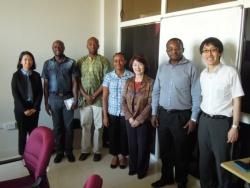 With Dr. Donath Olomi（second right）and his staff
Then JICE delegation visited TPSF which is one of representing organization of Tanzania business community 252 companies belongs to. As for ABE initiative, TPSF gives recommendation letters to those candidates from member companies who apply for ABE initiative through TPSF. Therefore Mr. Godfrey Simbeye, Executive Director has high expectations on ABE initiative program in the sense that the program opens the door to general people working in the private sector. JICE delegation exchanged opinions on how to recruit qualified candidates who could win in the ABE initiative selection. 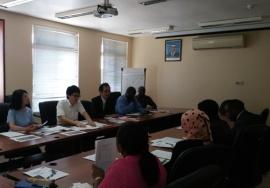 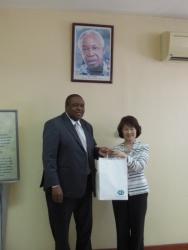 Mr. Godfrey Simbeye, Executive Director (left) and Ms. Yamano
Before leaving Tanzania, JICE delegation had a chance to meet a historian, Mr. Toshimichi Nemoto, who has been cooperating in ABE Initiative with Japanese Embassy in Tanzania, JICA Tanzania Office, and related educational organizations. He is the author of book on the record of the nation and the people from the perspective inside Tanzania, and the title of the book in Japanese “タンザニアに生きる―内側から照らす国家と民衆の記録』（2011年、昭和堂）”. He has been studying Tanzanian history from the era of His Excellency Mr. Julius Nyerere, Tanzanian first president, and JICE delegation wrapped up the African trip by touching Mr.Nemoto’s passion for Tanzania.
Takashi Akao, Deputy Director
International Students Division
Back to List
Back to Top