On 6 August 2016 before departure to Japan, 15 Kyrgyz JDS Fellows visited the Government’s Office for a courtesy call on Prime Minister, H.E. Mr. JEENBEKOV Sooronbai. Before inauguration as Prime Minister, H.E. Mr. JEENBEKOV had greatly contributed to the JDS Project as Director of State Personnel Service, the implementing authorities of JDS and also as Chairman of the JDS Operating Committee from January to March 2016.

Meeting with the Fellows, H.E. Mr. JEENBEKOV noted that Kyrgyz needed more government officials with highly specialized knowledge and expertise in order to achieve the country’s economic growth and to promote national welfare. He also expressed his satisfaction that many returned JDS Fellows had been playing key roles in the government. Prime Minister further encouraged the 15 JDS Fellows to contribute to the country’s development after their return from Japan.

As a representative of the JDS Fellows, Mr. STAMKULOV Marat from State Agency on Environment Protection and Forestry expressed his strong commitment for two years’ study in Japan. He mentioned that he was honored to study in Japan which has a long history and unique culture, and promised to contribute to the country’s development as a representative of young generation after gaining various knowledge and experiences in Japan.

The courtesy call was largely covered by local news papers and government websites. These 15 Kyrgyz JDS Fellows had already arrived in Japan and are working hard in their academic study for the Master’s degree in seven graduate schools in the fields of Public Policy, Economic Policy/Business Management, Transport and Agriculture/Rural Development.

JICE will commit to support the Fellows for their better academic achievement and to strengthen cooperation between Japan and the Kyrgyz Government. 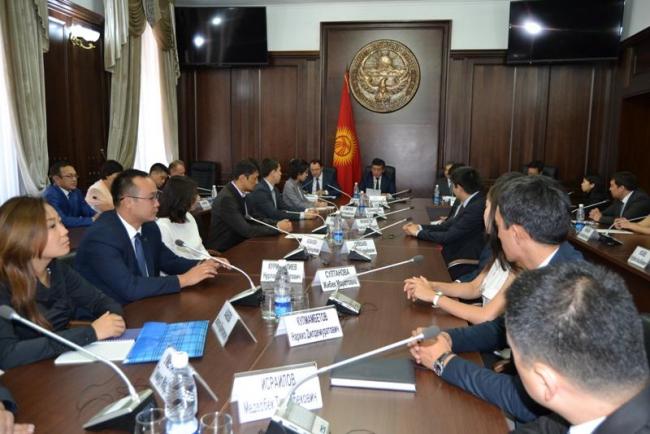