Canadian International Development Agency (CIDA) has been conducting policy implementation assistance project with the Vietnamese parliament as its counterpart organization.

CIDA PIAP office dispatched CSA-PIAP mission for the period from March 14 to March 20 to . The captioned email is “thank you message” for the successful completion of the mission.

CSA-PIAP study mission of Vietnamese members of the Parliament and Office of the National Assembly headed by Mr. Luong Phan Cu, Vice Chairperson of the Committee on Social Affairs visited to discuss many issues and questions with the Japanese members of the Diet, government officials, and university professors.

The program officer in charge of JICE was deeply touched and moved by reading the email.

JICE has been mainly implementing training programs in under the scheme of JICA, and recently international organizations as well as foreign government agencies have commissioned the design and implementation of training programs to JICE.

One of the advantages for JICE in making a variety of program is to utilize human resources network that JICE has established so far through JICA training programs, and JICE is able to design and modify the programs to suit the needs from partners.

CSA-PIAP study mission program included exchange of opinions with the Diet members of Democratic Party of Japan (DPJ), and visit to Consumer Affairs Minister Fukushima, thus causing a pain in the stomach of JICE program officer until the successful completion of the entire program.

Last year JICE received requests from international agencies such as GTZ in , ADB in and UNIDO in to cooperate in planning training programs.

JICE made every effort in each program to prepare well in advance and respond to the participants from abroad wholeheartedly. This approach might be highly appreciated by the representative of PIAP office.

All the program officers of JICE are fully responsible for designing of the training program, issue of visa, airline tickets booking, management of the program implementation, and evaluation of the program. JICE is determined to cherish and support human resources network, and share knowledge and experiences for our world and for the future.

We always remember the following closing remarks given by Mr.Michael McCabe.

“I look forward to other opportunities of cooperation with you.” 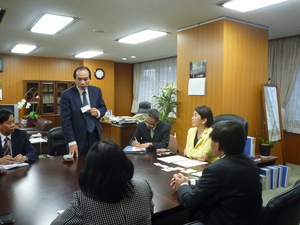