From December 17th through 20th 2010, Ms. Sachiko Yamano, Vice President of JICE, Mr. Kazuhide Kimura, Director of Overseas Business Department of JICE, Ms. Minako Ito, Overseas Business Department of JICE, and Ms. Yukari Iizuka, Director of Hokkaido Office, visited State Administration of Foreign Experts Affairs (hereinafter referred to as “SAFEA”) and China-Japan Friendship Association in Beijing, the People’s Republic of China (hereinafter referred to as “China”).
At SAFEA, we received a comment saying, “Our main job is to dispatch people in China to foreign countries for training, and to accept foreign experts to China. Therefore, there is a possibility that SAFEA and JICE will work together as a partner in various fields in the future.” JICE commented that we were looking forward to deepening ties with the SAFEA hereafter.

Moreover, from December 18th to 20th 2010, we attended the 4th China International Conference for Foreign Labor Service Cooperation, since we received an invitation from the Chinese Academy for International Trade, which was the affiliated organization of Ministry of Commerce in China. It is a large-scale conference where approximately 80 domestic organizations in China and 35 foreign organizations get together. Most of the participants are involved in human resource development, and deployment. In this conference, JICE was given the opportunity to introduce the general outline of our organization, and our achievements in the past. We were able to deepen our relationship with the Chinese firms dispatching human resources. 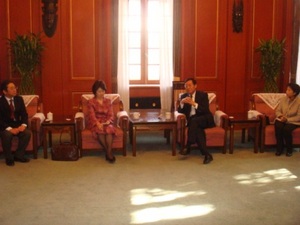 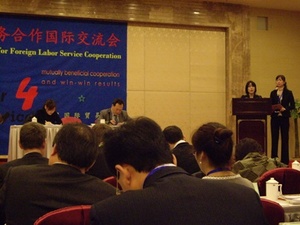 Ms. Ito and Ms .Iizuka giving a presentation about JICE at the conference at Wangfangyuan Hotel in Beijing, China
Back to List
Back to Top