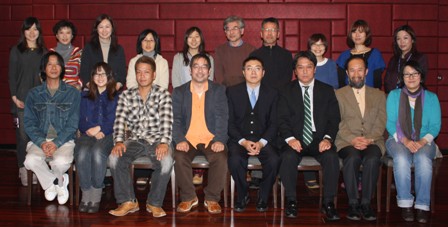 We visited the National Earthquake Emergency Rescue Training Base in Beijing. We were briefed on the general outline of the base and went on a tour inside the facility. We also had a chance to speak with Mr. Toru Nagasawa, who was dispatched from the Fire and Disaster Management Agency as part of “JICA’s Enhancement of Ability in Relief Operation Project in China”. There was a model of the remains from the earthquake inside the base, and it made us realize how difficult it was to rescue people locked inside tilted buildings. In the 3D movie theatre, we watched a 3D movie which was made for educational use, demonstrating how to prevent damages. Participants who watched the movie said it was such an informative movie that they understood the importance to educate people how to prevent damage, and that they also understood the reason why people in the base were stressing on the practical training. 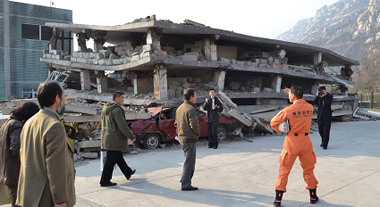 In Beichuan Prefecture of Sichuan Province, we went on an observation tour around the stricken area where damaged buildings and houses were left untouched. They were preserved just the way it was right after the earthquake. With the support of Shandong Province (a sister province of Sichuan Province), they made a new town in a different place to where people relocated. Volunteers in Beichuan Prefecture are now focusing on healing victim’s minds. Participants from Miyagi Prefecture in Japan said, “The stricken area where we visited looked just like our town the next day the Great East Japan Earthquake occurred, but we felt a lot of hope seeing how people were recovering from the disaster.”
The delegation mixed with volunteers who were actually committed to volunteering activities in Beichuan Prefecture and Mian Yang City. Most of the volunteers from both countries are working as volunteers while doing other works for their own living. All the participants had various backgrounds; a person working as volunteer coordinators in Ishinomaki City of Miyagi Prefecture in Japan, another person involved in physical jobs such as cleaning up debris, another person providing meals and doing clean-ups at a facility for refugees, another person in Hokkaido accepting victims from the Tohoku area, and another person providing relief supplies to the stricken area, etc. They were able to find common grounds in many ways with the volunteers in China. 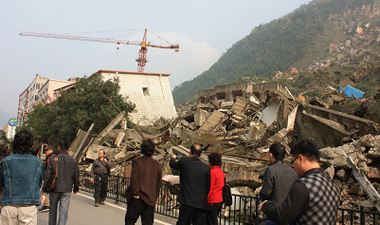 【Observing the remains of the Earthquake in Beichuan Prefecture】

On the last day of the visit, we held a social meeting with the people in the Sichuan Division of Communist Youth League of China. In the meeting, three volunteers from each country gave a presentation about their respective volunteering activities using the power-point, and then exchanged views. We learned that Chinese volunteers were helping with the relief efforts in places like Qinghai and Yunnan Provinces by making full use of their own experiences in Sichuan Province. One of the Chinese volunteers said that they deeply understood the situation in the stricken area of Tohoku by listening to the stories of the people actually working as volunteers on the ground, instead of listening to the news. They were all exchanging their own opinions even during lunch time. 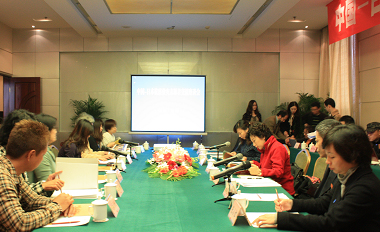 【Meeting with the volunteers in Sichuan Province】 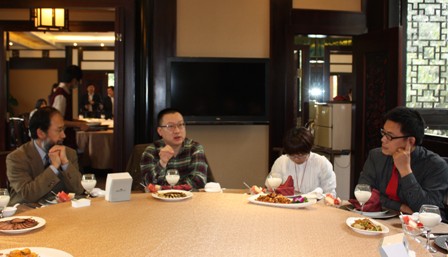 【Exchanging views at the luncheon】

The population in Sichuan Province is about 90 million. It is famous for the cute panda, but we found out from this experience that many people were working hard from various directions to recover from the earthquake. Participants said that they came to realize the importance of the volunteering activities, and that they were more grateful than ever about the fact that they were receiving relief aid from all over the world. We are hoping that this project will somehow lead to relief efforts in the stricken areas, and at the same time, it will deepen the friendship of both nations.