On June 25th 2012, alumni meeting was held at the Embassy of Japan and the ambassador’s residence in the People’s Republic of China (hereinafter referred to as “China”), marking the 10th anniversary of Japanese Grant Aid for Human Resource Development Scholarship (JDS) Project there. JICE has been an Agent of the JDS Project in China since 2002. Since last year, we have been working intensively on the follow-up of the reunion, which is said to be the crucial issue for the JDS Project. This alumni meeting, marking the 10th anniversary, has been acknowledged as one of the 40th anniversary Projects of the Restoration of Diplomatic Ties Between Japan and China. Mr. Yu Jian Hua, Deputy Manager of the Ministry of Commerce on behalf of the Government of China, and H.E. Mr. Uichirou Niwa, Ambassador Extraordinary and Plenipotentiary in China, have attended the gathering and made a speech congratulating this occasion. 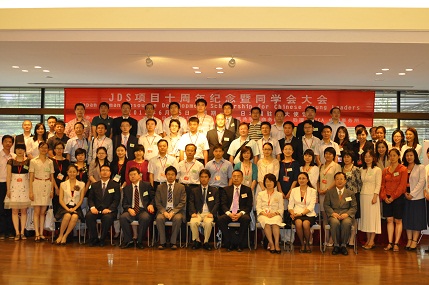 Mr. Yu Jian Hua has highly praised JDS Project, saying that “328 talented JDS fellows who have already come back to China are doing a significant job. They are contributing to the bilateral friendship and the economic development in China. Japan and China are important partners and Chinese Government is focusing on promoting the co-Project among Japan, China and the Republic of Korea. We are looking forward to the activities which will be implemented under JDS Project in the future.”

On the other hand, H.E. Mr. Niwa said, “50 out of 395 young administrative officials so far studied in Japan, and also 20 JDS fellows scheduled to study in Japan this summer attended this meeting. Since I took up my post as an ambassador, I have done my best, as much as I could, to meet with people working at the front line of JDS, and ex-JDS fellows in regional areas in China. We must pay respect to what we have achieved during this 10 year period, and to work hard to build good relationships toward the future. Building trust among people will become the foundation of bond between two nations. I am hoping that all of you who are responsible for China’s future would play a role to establish mutual understanding between Japan and China.”

Mr. Guo Qiang, President of JDS Alumni Association in China, suggested that the association publish a brochure for this memorable reunion (in order to motivate people in the region to participate in this reunion). He also suggested that the association establish regional subcommittee meeting, and subcommittee meeting for business to make this reunion more sustainable.

Mr. Guo said, “We owe to an enormous support by the Operating Committee of the JDS Project to hold this event. We’d like to keep this reunion active by gathering all the wisdom of the alumni association. Publishing a brochure for this alumni meeting will be a step forward for us. We must confront a lot of difficulty in order to make this reunion independent. The biggest difficulty is when the council starts functioning. We ask all of the Operating Committee members of the JDS Project and JICE to support us through this process towards independence.” 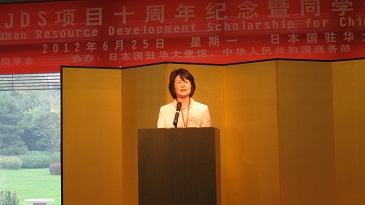 JICE has been a part of the JDS Project in China since it was launched, and we are stressing on the support for the reunion. We’d like to introduce one of the examples of those activities.

Based on request by the Embassy of Japan in China, JICE joined H. E. Mr. Niwa on his regional business trip to arrange a social meeting with ex- JDS fellows in the region. We held this meeting at 6 different places (including places such as Shenyang City of Liaoning Province, and Guiyang City of Guizhou Province, etc.) from April 2011 through May 2012. 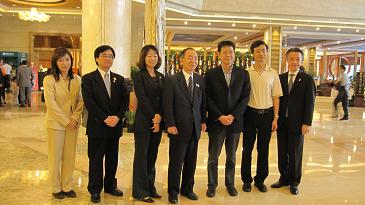 From December 2011 through May 2012, JICE held a social meeting with government related personnel from both Japan and China in Tokyo and Beijing for JDS alumni. 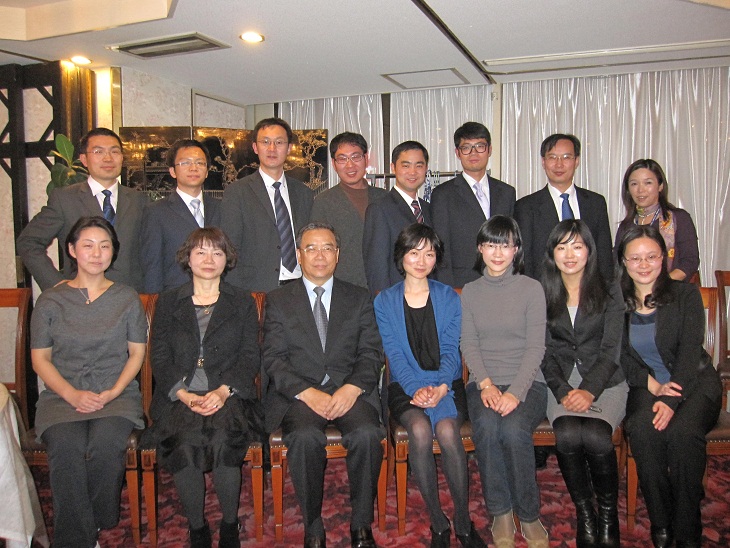 【The first social meeting held for JDS alumni and staffs from Embassy of Japan in China/ Mr. Lui Ke Jeng (3rd from the left in the front row), Minister, Embassy of China in Japan】

JICE will continue to focus on this activity backing the follow-up, so that JICE can foster the development of the reunion and vitalize the exchange activities with Japan.