It was the first time for Japan to set up its own Pavilion to promote Japanese higher education in UAE aiming at attracting UAE students to study in Japan.

15 major Japanese universities, Japan Student Services Organization (JASSO), and the Educational Development Office Abu Dhabi-Japan (EDO) operated by JICE, introduced their own organizations and activities at the Pavilion and contributed to raising awareness towards Japanese higher education in UAE.

More than 7,500 people visited the Pavilion during these 3 days and they acquired a lot of information about the universities. They also enjoyed each university’s seminars, the performance of Japanese calligraphy, and the presentation about life in Japan. The success of this exhibition marked an important step towards increasing the number of UAE students who will study in Japan.

At the opening ceremony of the Pavilion, His Excellency Sheikh Nahyan Bin Mubarak Al Nahyan, Minister of Culture, Youth, and Social Development of the UAE, Ms. Midori Matsushima, State Minister of Economy, Trade and Industry of Japan(METI), H.E. Dr. Mugheer Al Khaili, Director General of Abu Dhabi Education Council(ADEC), H.E. Yoshihiko Kamo, Japanese Ambassador to the UAE, and H.E. Saeed Ali Yousef AL NOWAIS, UAE Ambassador to Japan, celebrated the establishment of EDO which was established in ADEC based on the MOU concluded between ADEC and JICE in May 2013. 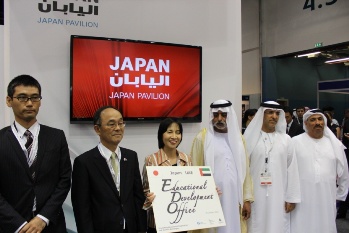