JICE held a Final Report Presentation and a Farewell Party for interns from Masdar Institute of Science and Technology (MI) in Abu Dhabi, United Arab Emirates (UAE) on July 4, 2014. H.E. Mr. Saeed Ali Yousef Al Nowais, Ambassador Extraordinary and Plenipotentiary of the UAE to Japan, Mr. Hideyuki Urata, Director for Petroleum Policy, Agency for Natural Resources and Energy, Ministry of Economy, Trade and Industry (METI), and other distinguished guests from the concerned companies attended the Farewell party to congratulate the interns on their achievement.

This is the third year to implement the JICE internship program for MI. The duration was about 2 months, and the part of the program was implemented in UAE. The 8 interns have participated in Japanese language classes in UAE last April, completed JICE foundation program and their field internship at each concerned company in Japan from May 19, 2014.

The 8 participants were interned with JGC Corporation, Chiyoda Corporation, Mitsubishi Heavy Industries, Ltd., Mitsubishi Electric Corporation, and Toshiba Corporation respectively for 1 month from May 27, 2014. After they finished their field internship, they shared their final report to all the concerned accepting companies at Final Report Presentation, and were given certificates by Ms. Masako Kishimoto, Vice President of JICE.

At the end of the Farewell party, the interns showed their appreciations to each concerned company and every person who gave effort to this program. 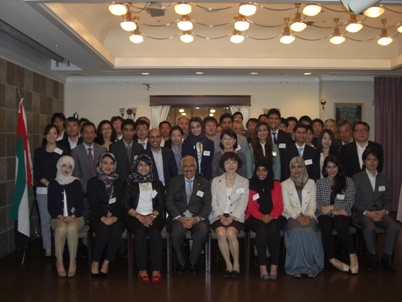