His Excellency Mr. Solomon K. Maina, Ambassador of Republic of Kenya, called on Ms. Sachiko Yamano, President of JICE on September 18th, 2018, to express his courtesy on JICE’s commitment to supporting Kenyan participants studying in Japan under ABE Initiative Program, a flagship Master’s degree and internship program of the Japanese Government aimed at boosting future business between Japan and Africa. Mr. Maina, who is especially keen to promote business and investment to Kenya, also discussed how Kenya can develop further partnership with JICE in this regard.

Expressing her whole-hearted support for the Ambassador’s aspiration, Ms. Yamano introduced to him and his accompanying members from the Kenyan Embassy two ex-ABE Initiative participants: Mr. Eliud Kiprop from Kenya and Mr. Dickson Zakaria Kindole from Tanzania, who obtained Master’s Degree from Ashikaga University in March, 2017 as 1st batch ABE students. They launched a business consultancy firm named “Higashi Africa Investment Company Ltd.（HAIC）” together with other 1st batch alumni in August, 2018. Their local business is going well providing technical and logistical support for the Japanese companies to explore a new business in East Africa under the management of ex-ABE participants.

Having met with the two young African business initiators, Mr. Maina appreciated that it was one of many concrete examples of how ABE Initiative is making success on the ground. 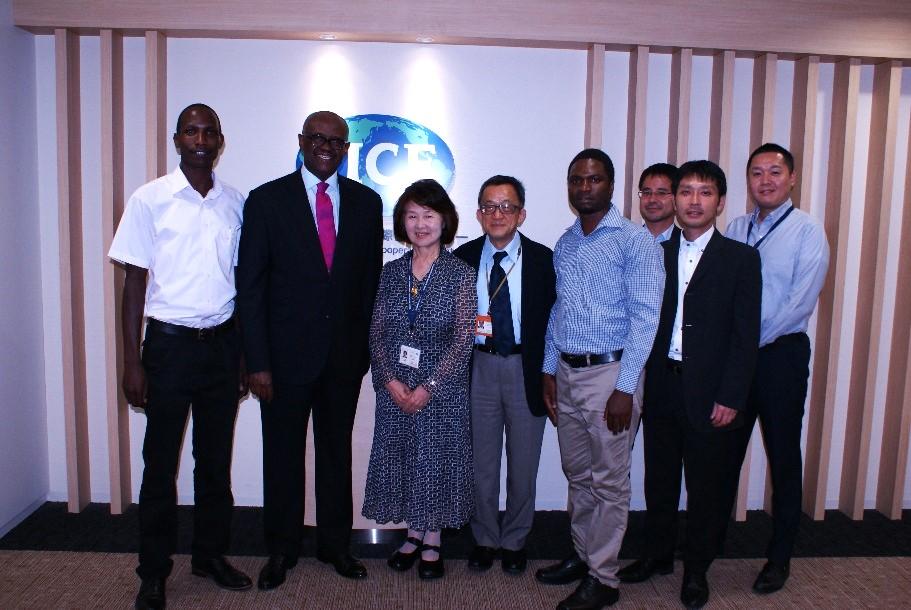 Mr. Maina (2nd from left), Mr. Kiprop (leftmost) and Mr. Kindole (4th from right) photographed with Ms. Yamano (3rd from left) and other staff of JICE
Back to List
Back to Top