On May 19, 2021, JICE conducted a webinar titled “Policymaking in Automobile Industry of Former Soviet Countries” with Dr. Sardor Ubaydullaevich Tadjiev, Deputy Chairman of Uzavtosanoat in Uzbekistan, who obtained his PhD at Osaka University under the JDS scholarship.

Dr. Tadjiev first obtained his Master’s degree at International University of Japan in 2011 under JDS. Seven years later, he returned to Japan as a JDS PhD fellow and was successfully awarded his PhD from Graduate School of Economics, Osaka University in March 2021.

Dr. Tadjiev, who was Assistant to General Director at Planning Department in Uzavtosanoat when he first came to Japan, held various posts including a manager, and was appointed to the Deputy Chairman of Uzavtosanoat while he was studying at Osaka University.

About 60 people participated in the webinar including current JDS fellows and alumni, JICA Uzbekistan Office, Japanese companies in Uzbekistan, and staff members of Uzavtosanoat.

The webinar was kicked off with opening remarks by Mr. TAKEMURA Yoshimasa, the Senior Representative of JICA Uzbekistan Office. Mr. Takemura congratulated Dr. Tadjiev on his completion of the PhD program in the scheduled 3 years despite the negative impact of Covid-19. He also encouraged JDS alumni to address the socio-economic issues in Uzbekistan in collaboration with JICA. The number of JDS Uzbekistan alumni has already reached around 400.

Dr. Tadjiev’s presentation started with some explanations on JDS and his appreciation to JICE. He then shared an episode in Japan that he was impressed by his son’s kindergarten graduation ceremony, where children received a certificate just like diploma from a university.

The main part of Dr. Tadjiev’s presentation was about “The Development of the automotive industry in post-Soviet countries since 1991”, which was the 1st chapter of his PhD thesis. He explained that the success of Uzbek automotive industry was greatly supported by the government’s policy to attract foreign investment and the easy access to the massive market of Russia.

After Dr. Tadjiev’s presentation, his supervisor Professor Pierre-Yves Donzé at Osaka University gave him feedbacks and comments on his PhD thesis. Professor Donzé explained how unique the success of Uzbek automotive industry was, considering the balance of its market size and the policy. He also mentioned the importance of Dr. Tadjiev’s research, which explained why it has been successful. The 90-minute webinar was closed after the Q&A session.

JICE will continue not only to support JDS fellows for their fruitful years in Japan but also to keep our eyes on the alumni’s success and to create opportunities to share their knowledge and experiences. 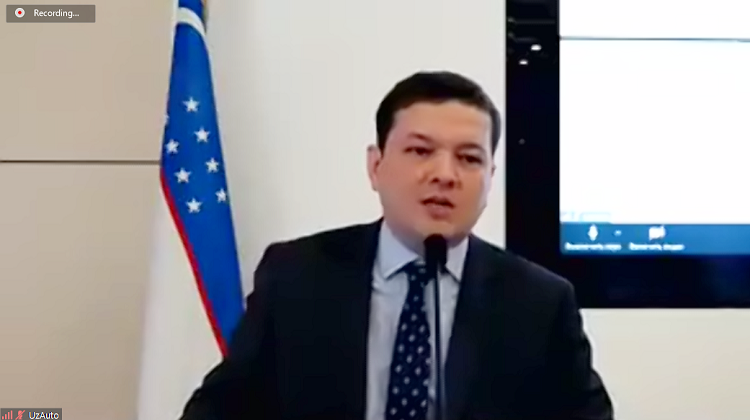 Dr. Tadjiev at Q&A session
Back to List
Back to Top