JICE has signed a Memorandum of Understanding (MoU) with The Kingdom of Bahrain on the Natural Pearl Industry Revitalization Project.

On March 21, 2013, Japan International Cooperation Center (JICE) has signed a Memorandum of Understanding (MoU) with The Kingdom of Bahrain on the Natural Pearl Industry Revitalization Project.

Bahrain was once a home of pearl diving and an international hub of natural pearl trade. Its historical buildings on Bahrain Pearl Trail as well as pearl oyster beds in Bahraini waters were inscribed as a UNESCO World Heritage Site on June 30, 2012. Unfortunately many pearl divers migrated into oil industries in early 1930s and cultivated pearls were introduced in the same period, which caused the decline of natural pearl industries. Royal Court of Bahrain took initiative to launch a project to revitalize Bahraini Natural Pearl Industries.

With His Royal Highness Salman Bin Hamad Al-Khalifa, Crown Prince and the First Deputy Prime Minister of Kingdom of Bahrain in attendance, those who signed the MoU are, Bahrain Economic Development Board, Mumtalakat Holding Co. BSC as an investing arm of the Kingdom, Kinoshita Pearl Co. Ltd., First Stem Cell Japan Co. Ltd., and JICE.

The First Phase of the Project is to explore the natural resources in Bahraini waters and study the environment and habitat of pearl oysters. The Project intends to confirm the oyster population necessary and sufficient for Natural Pearl Industries, and assess the potential impact of pearl fishing to Bahraini waters ecosystem. Experts from Japanese research institutes and pearl industries are expected to contribute to the project as members of all-Japan task force.

The Second Phase of the Project is, utilizing the results of the Phase One, to draw up and propose a practical business plan of revitalized Natural Pearl Industries including the market and profitability estimation for Bahrain government.

JICE believes this project can be one of its efforts to strengthen the friendly and cooperative ties between Bahrain and Japan by developing economy and human resources of Bahrain. JICE will continue to work with Bahraini people for other opportunities of cooperation and collaboration. 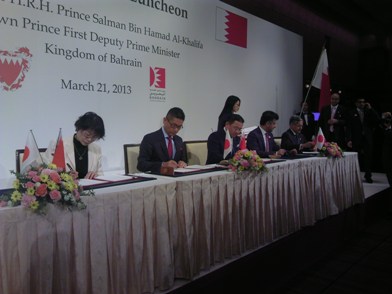 Masako Kishimoto (leftmost), the Vice President of JICE, signed the MoU
Back to List
Back to Top