JICE President Ms. Sachiko Yamano accompanied by Ms. Fei Katori, Staff, China Division attended a reception held in Beijing on October 25th 2018 to commemorate the 40th anniversary of the conclusion of the Treaty of Peace and Friendship between Japan and China jointly hosted by the Chinese People’s Association for Friendship with Foreign Courtiers and China-Japan Friendship Association.

More than 800 dignitaries from China and Japan were present at the reception including Prime Minister Shinzo Abe, Prime Minister Li Keqiang, Ms. Li Xiaolin, President and Mr. Song Jingwu, Vice President of Chinese People’s Association for Friendship with Foreign Courtiers. At the opening speeches, both Prime Ministers expressed their appreciation for the dedication of the people concerned in paving the way for the conclusion of the Treaty as well as their sustained efforts to maintain friendship between the two countries. They also stressed the importance of further promoting the exchange between Chinese and Japanese youth and their collaboration in the third countries.

Thanks to the efforts led by Mr. Xu Jinping, Vice President of China-Japan Friendship Association, JICE set up JICE-China Friendship Fund in July 2011 for the purpose of promoting civil diplomacy between the two countries. By utilizing the fund, JICE has been partnering with the Association to conduct various exchange programs in the fields of youth exchange, education, business, entrepreneurship, sports and culture.

Moving forward, JICE will be committed not only to boosting China-Japan bilateral relationship on a people-to-people basis but to exploring possibilities of the two people working together in the third countries in the fields of youth exchange and human resources development. 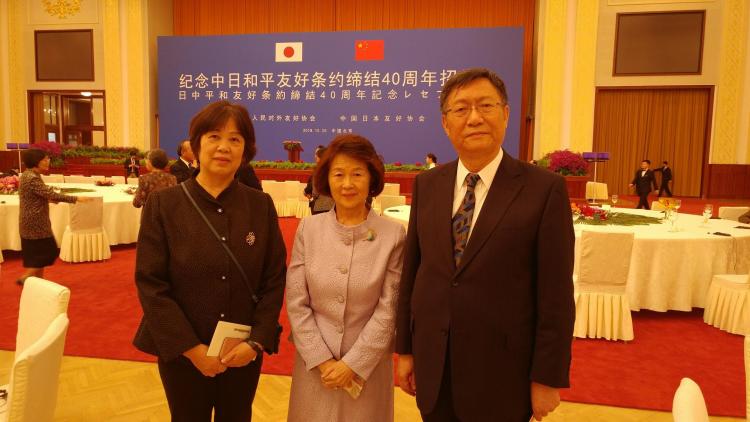